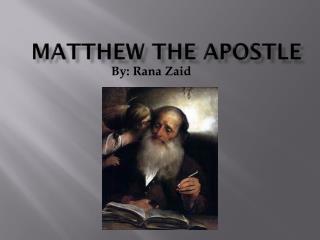 Matthew the Apostle. By: Rana Zaid . Birth/Death/Occupation . Matthew was born in the 1 st century in Palestine. Died in 34 AD in Hierapolis , Turkey. His occupation was a tax collector, disciple of Jesus, Gospel writer and a missionary. . Who was Matthew?.

The Gospel of Matthew - . the first book listed in the new testament canon well-ordered and contained detailed teaching

The Four Evangelists - . matthew mark luke john. note on notes:. look for keywords in each bullet write keywords, but

The Gospel of Matthew - . chapter 5. matthew’s gospel. 2 minute free-write what do you already know about matthew’s

The Apostle Andrew - . a lesson by bishop andy c. lewter, d. min. other name of the apostle

John the Apostle - . by molly and janet. his family and friends. his brother was james their friends were peter and

Matthew: The Man/ The 1 st Gospel - . matthew was a hebrew. the son of alphaeus. matthew 9:9 mark and luke call matthew

The Gospel of Matthew - . matthew’s view of the gospel. 1. who wrote the gospel?. the text gives no indication external

Matthew - . this is a picture of the angel talking to 3 women about the christ's resurrection according to the gospel of

The New Testament - . the gospels. matthew. the apostle matthew, until recent times was, the only person considered to be

t he Four Gospels - Intro to. t he four gospels. life of christ ~fall 2010. the four evangelists 8 th century the book of

Matthew: Tax Collector Object of God's Grace Disciple - . purpose. to tell the story of jesus as the climax of jewish,

Matthew - : the gospel of the messiah. what are the gospels?our english word ?gospel" comes from the greek

The Antichrist - . introduction. the apostle john declares and warns saying in 1 john 2:18. i want you to pay special