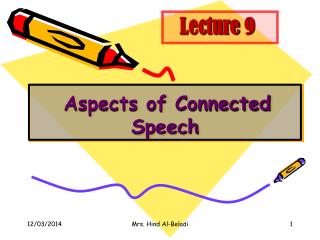 Lecture 9 . Aspects of Connected Speech . SPEECH. MECHANICAL. CONNECTED. Why shall we study aspects of connected speech?.

Speech Marks - . we are learning to. use speech marks correctly in our writing. why do we need them?. speech marks are

Speech vs. Language - . how is speech produced? speaking in public preparing a speech creating &amp; conducting an

Lx I The sounds of German Lecture 6 – Week 8 - . i. connected speech – co-articulation and assimilation ii.

Suprasegmental phonology - . in connected speech, especially in fast and fluent speech, there are several phenomena of