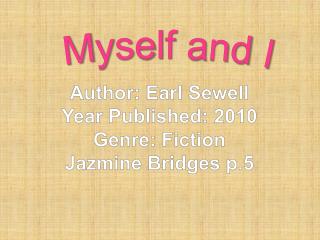 Myself and I. Author: Earl Sewell Year Published : 2010 Genre: Fiction Jazmine Bridges p.5. Setting. The story takes place in this decade. The main character (Keysha) and her family live in a big house, in a high classed neighborhood. . Characters. Me, Myself, and I - . by: katrina dowall. i am the one named. my name has always been the same but for a long time i

Me, Myself and I - . lauren weidenmuller. hobbies. fellowship of christian athletes soccer (playing and coaching) running

Me, Myself, and I - . walid benkhelouf september 12, 2012 bsfi design studio. table of contents. where i grew up my

Me myself and I - . r. regular because i am a human and i am like everyone else. a. adventurous because i like to

Me, Myself, and I? - . regardless of the situation i find myself in, i know that i will act the “right” way. agree or

Me, Myself, and I - . by liam sundling. lived in oak park my whole life. went to horace mann elementary school. then went

Me Myself And I! - . by : jessica feth. my past. i got hit in the head with a metal baseball bat and a golf club and the

ME MYSELF AND I - . ronnie. i don’t want be like him!. my future car!. the super car. the ultimate baby. my favorite

Me, Myself and I - . antoun antoun keirouz. a. artistic – i am creative and i have great imagination when it comes to

Me, Myself And I - . guru amar das jee writes on panna 39 of satguru granth sahib jee : &quot;i have done this, and i

Me, Myself and I - By: muneera fakhroo class: pse grade: 6e. me, myself and i . muneera ibrahim jassim fakhroo . this

Me, Myself, I - . by: sergio mendoza. all life is an experiment. the more experiments the better – ralph waldo emerson.