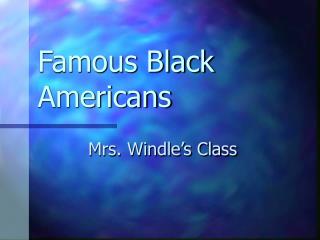 Famous Black Americans. Mrs. Windle’s Class. Bill Pickett By John Spinks. Lived 1932-1970 Introduced bulldogging a modern rodeo. Learned how to rope and ride as a boy Did his bestperformance in 1908 Most famous for bullridding. http://www.gibbsmagazine.com/Bill%20Pickett.htm. Who Am I? Famous Black Americans - . second grade social studies. who am i?. i was a pivotal figure in the fight for

Famous Americans - . jackie robinson. first african-american to play in the major leagues. played baseball with the

Famous Americans - . lily. franklin d. roosevelt. helpful diligent the only child he could not walk helps boys that were

Famous Americans - . riley. mary mcleod bethune. born in a cabin. wanted to read. became a teacher. she could not go to