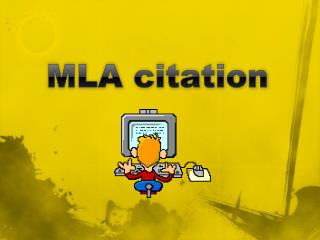 MLA citation. What does MLA stand for?. A group of scholars that make rules and guidelines for p rofessional writing. What it is?. A trusted set of rules that shows you how your paper should look. Rules that govern how you cite your sources. MLA Citation - . the no nonsense, straight forward, sometimes you have to figure stuff out yourself review. what this is

MLA CITATION - . below the slides on your graphic organizer, record the following notes. then complete your mla

MLA Citation - . internal documentation and works cited. why do we cite sources?. to leave a trail of clues for

MLA Citation - . what it is and how to use it. what it is?. a standard format for all high school scholars to use when

MLA Citation - The pdf posted at www.mauhau.wordpress.com under the “mla citation” link provides the current and

MLA Citation Style - . avoid plagiarism by knowing what information you need in order to give proper credit for ideas. if

MLA Citation Style - . modern language association. what you already know. (but we’ll remind you just in case!). what

MLA Citation Helper - . made by danielle kingsbury for digital environment spring 2012. skip the intro. how to use this

MLA Citation Workshop - . so i have my sources, what do i do now?. setting up your pages… . the default settings for