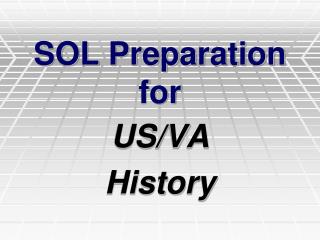 SOL Preparation for. US/VA History. Getting ready for the SOL. There are less than 80 questions on the SOL Exam They are multiple choice questions Some include maps & graphs. You have unlimited time in which to complete the test Answer all questions, leave no question unanswered

Preparation for Physics - . masahiro morii for the atlas group harvard university laboratory for particle physics and

Preparation for Final - . end of class evaluation. 1. do you feel that this class has helped you to improve as a writer?

Preparation for Upgrade - . ayso referee certification and training requirements. * service units may be waived for youth

Preparation for Disaster - . steve jones editor, sqlservercentral red gate software. be prepared i will do my best. why

Preparation for practice - . what you need to do to prepare for and undertake your placements . midwifery practice

Preparation for Midterm - . “when i have fears” by john keats “do not go gentle into that good night” by dylan

Preparation for AAALAC - . sylvia j. singletary, dvm daclam. we know you’ve heard it before, but…. the following

Preparation for Acting - . 8 key terms and steps for actors. can acting be taught?. what do you think? with a partner

SOL Changes and Preparation - . a parent presentation. the focus on the new tests is. rigor. rigor is not…. something