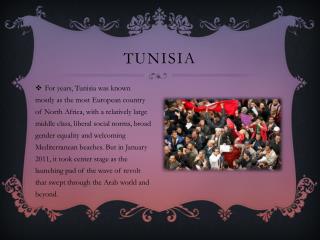 Tunisia - . anti-american rallies spread to tunisia over a video of denigrating the prophet muhammad. protestors stormed

Tunisia - . the centre of mediterranean and international studies and the konrad -adenauer- stiftung foundation are

TUNISIA - North-east of africa. *algeria to the west *libya to the south *mediterranean sea to the nort and to the east.

Tunisia - . the tunisian government has closed down the libyan border after smugglers killed a tunisian solider. the

Tunisia - . tunisia just currently had a revolution they have been having anti-american rallies the american embassy was

DEVINFO TUNISIA - . what is devinfo tunisia ?. an information management system with:. a socio-economic database of more