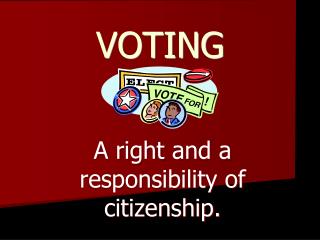 Voting: - . a privilege or a right?. the power of the vote. my vote is my voice . . .and the voice of all who struggled

VOTING - . the history of voting in america. click image. presidential election v oter turnout. why do americans vote on

Voting - . in canada and around the world. the least you should know. what is gerrymandering and how can it be fixed?

Voting - . using mathematics to make choices. voting methods. 11.1. use the plurality method to determine the winner of

Voting - . mrs. copa will explain why you should vote as well as why it is important!. warm up. •is voting important to

Voting - . motor-voter law (1995). register at dmv to vote provide registration by mail forms available to any state or f

Voting - . qualifications. citizenship -- groups have been denied citizenship throughout our

Voting - . from the declaration of independence

Voting - . ch. 10 civic responsibilities and duties. vocabulary. civic duties – things you are legally required to do