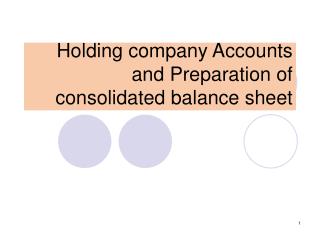 Holding company Accounts and Preparation of consolidated balance sheet - Dedicated to. all my beloved

Consolidated Accounts - . controls the composition of the board of director controls more than half of the voting power

ACCOUNTS OF HOLDING COMPANY:BASICS - This ppt will make clear the basic concepts of accounts of holding company.it has a

Balance Sheet - . financial photo of the business – financial position at one point in time takes on date and shos us

Balance Sheet - . describes the financial condition of the business at a point in time gives two important financial

Balance Sheet - Limitations: most assets are recorded at historical cost rather than at market value. resources such as

BALANCE SHEET - . shows assets liabilities and owners equity as of a certain date so there is an asset section on the

Balance Sheet - . assets (lhs) what we own debt and equity (rhs) what we owe point in time accural accounting matching of