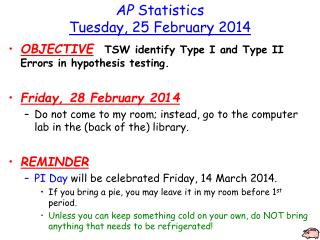 AP Statistics Tuesday, 25 February 2014. OBJECTIVE TSW identify Type I and Type II Errors in hypothesis testing. Friday, 28 February 2014 Do not come to my room; instead, go to the computer lab in the (back of the) library. REMINDER PI Day will be celebrated Friday, 14 March 2014. Pancake Tuesday Tuesday 25 th February 2014 - . the starfish children have been flipping pancakes in their dramatic play

Tuesday, February 18, 2014 - . bell ringer: write the 4 supply determinants and the definition of the law of diminishing

Tuesday February 4, 2014 - . obj: swbat understand the roles of the president and how they set up their inner circle.