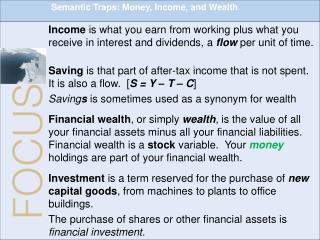 Semantic Traps: Money, Income, and Wealth. Income is what you earn from working plus what you receive in interest and dividends, a flow per unit of time . Saving is that part of after-tax income that is not spent. It is also a flow. [ S = Y – T – C ]