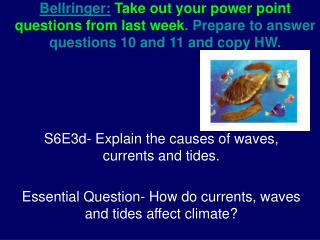 Bellringer: Take out your power point questions from last week . Prepare to answer questions 10 and 11 and copy HW. S6E3d- Explain the causes of waves, currents and tides. Essential Question- How do currents, waves and tides affect climate?. What is Oceanography? - . oceanography is an interdisciplinary science because it applies all the sciences and

Tides - . tides are huge shallow water waves. they are caused by: - gravitational force of moon and sun motion of the

Tides &amp; Currents Seminar - . these east coast slides may be added to or substituted for slides in the seminar.

Ocean Waves and Tides - . waves. a wave is a rhythmic movement that carries energy through matter or space. in oceans,

Earth Science: 16.2B Tides - . tides. tides. tides are regular changes in the elevation of the ocean surface. their

Tides: - . high or low - what causes tides?. study jams video. what are tides?. tides are the daily rise and fall of

Tides - . what are tides? why are there low and high tides each day?. tides. the tides are the rise and fall of sea

Topic 7: Tides - . biggest ocean waves of all. types of tides. tides are a combination of the solar and lunar tides

Tides - . tides are extremely long waves caused by the gravitational attraction of the moon and the sun on earth. also

Tides of Transformation: Riding the Waves with Coordination and Collaboration - . national title i conference, san diego

The Motion of the Ocean - . an overview of… waves currents &amp; tides. regular ocean waves are the main reason

Tides - . by, jase franke period 4. what are tides?. tides are shifting patterns of water level. tides are formed by the