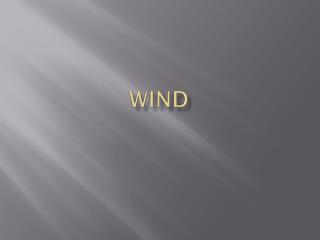 Wind. Wind. Provides natural ventilation and usually cools buildings/people because it accelerates the rate of heat transfer Speed and direction change throughout the day and year. Not as predictable as the sun’s path Wind rose diagrams help visualize the patterns at a site. Negatives. Wind - . wind is the general horizontal motion of air from one location to another based on differences in air pressure

Wind - . stand by to wear ship wear-o! rise tack and sheet on the main brace your yards square to the wind shift all fore

Wind Causes of Wind - Wind causes of wind. what causes the wind to blow? as the sun warms the earth's surface, the

Wind - . weather and climate unit. what is wind?. wind is air in motion.  two factors are necessary to specify wind:

WIND - . wind is movement of air caused by differences in air pressure. the greater the difference, the faster the wind

Wind - . the summer wind, came rolling in, from across the bay. what causes wind?. uneven heating of the earth’s

Wind - . caused by... uneven heating of the earth’s surface winds are named by the direction they blow from. direction

Wind - . eq: what is wind?. wind is air in motion. it is produced by the uneven heating of the earth’s surface