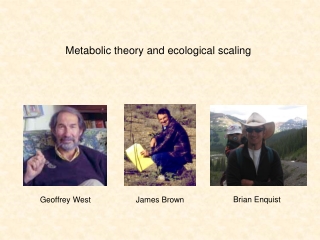 Metabolic theory and ecological scaling. Brian Enquist. Geoffrey West. James Brown. The grand idea of scaling theory is that animal and plant branching systems and tissues are self similar. They are assumed to have a fractal structure. Metabolic rate is proportional to tissue surface area. Ecological Scaling: Power Laws - . e. natasha stavros ph.d. candidate university of washington. who am i? how did i get

Ecological-Evolutionary Theory - . who gets what and why?. part i. overview. an aside…. “theory” and

Ecological/System Theory - . an emerging approach to education. theory: what ’ s the big deal?. theory shapes how we

Bronfenbrenner and the Ecological Systems Theory - . by haylea brewer. the individual