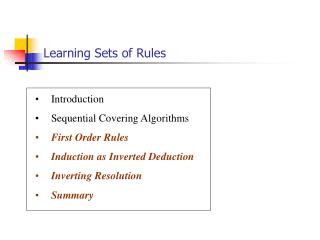 Rules for learning assembly - . rule 1. on your marks… you gotta be ready! be switched on be interested. rule 2. be

Who Sets the Rules for Cool? - . a learning opportunity for grade 6 in social studies, language arts and technology

SETS OF CHROMOSOMES - . diploid (2n) has full number (2 sets, one from mom and one from dad) of chromosomes (2 in each