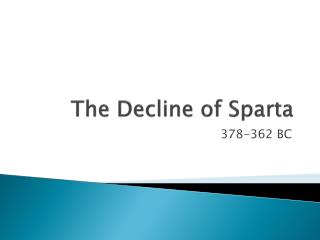 The Decline of Sparta. 378-362 BC. The Facts. 400 BC: Sparta is the leader of the Greek World, planning an invasion of Persia 395-387: Corinthian war leaves Sparta weakened, and her prestige bruised. The Evolution of Archaic Sparta - . february 1 st , 2012. what is the spartan mirage and why is it problematic for

Sparta - . spartans worked to create a strong city-state: only healthy children were allowed to live boys were trained

SPARTA - . military society. life revolved around army, no need for city walls…army will defend all men aspired to

SPARTA - . sparta focused on foreign conquest in response to population pressure by 600 bc it had taken over the nearby

Sparta - . xenophon constitution of the lacedaemonians phil 2011 2006-07. what was sparta?. great rival of athens; the

Sparta - . leading city state . the city state of sparta. this is sparta!!!. as you all know that the greeks always

THE DECLINE OF FEUDALISM - . chapter 5. three causes for the breakdown of feudalism:. political changes in england: magna