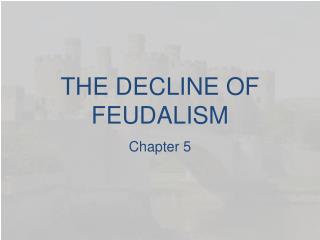 THE DECLINE OF FEUDALISM. Chapter 5. Three Causes For the Breakdown of Feudalism:. Political changes in England: Magna Carta (a document that limited the king’s power & strengthened the rights of nobles) Bubonic Plague (“Black Death”): The Decline of Feudalism: The Disasters of the Late Middle Ages - . the church scandal (the schism). the hundred years

The End of Feudalism - . social studies 10 mr. binet. today’s class: thursday, may 28. review of black death. be sure

The Rise of Feudalism - . life after charlemagne. charlemagne dies in 814 his empire is divided amongst his three sons

The Weakening of Feudalism - . england. king henry ii. ruled from 1154 to 1189 made legal reform a central concern of his

Rise of Feudalism - . feudalism is a decentralized organization. arises when central authority cannot, or will not

The Decline of the Republic - . mass of unemployed landless men allowed for the rise of ambitious men no trust in senate

The decline of the Liberals - . why support for the liberals declined 1. divided opinions about the war. some lib mps

Rise of Feudalism - . the problem returns…. after charlemagne died in 814 a.d., kings found it increasingly difficult

Feudalism - . by : pablo valencia. introduction. feudalism made major changes to european society. it was a social system

Absolutism: The Age of Kings in Europe (1600-1770) - . the decline of feudalism, the renaissance, the protestant