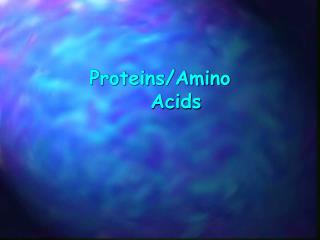 Proteins/Amino Acids. Preliminary Concepts. Protein is the principal constituent of organs and soft structures of the animal body a continuous supply is needed from food sources throughout life for growth/repair food protein  body protein food protein: plant or animal Proteins: Their Structure and Biological Functions - . biological functions of proteins. proteins are the agents of

Chapter 5 - . soil and fertilizer n. definitions. organic-n: n that is bound in organic material in the form of amino

Amino Acids and Proteins - . structure of amino acids. the hydrolysis of most proteins produces about twenty different