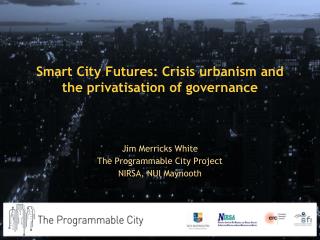 Smart City Futures: Crisis urbanism and the privatisation of governance Smart City Futures: Crisis urbanism and the privatisation of governance

Smart City - The first question is what is meant by a ‘smart city’. the answer is, there is no universally accepted

New Urbanism - . what is it?. urban design movement originating in the late ’80s – early ’90s. aims to reform all

Airwil Organic Smart City - Is coming in greater noida tech zone 1 to fulfill such type of desire of the people. a smart

4th Asian Roundtable on Corporate Governance - . after the corporate governance crisis: an opportunity for asian