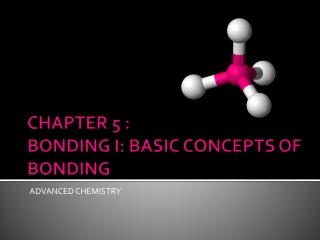 ADVANCED CHEMISTRY. CHAPTER 5 : BONDING I: BASIC CONCEPTS OF BONDING. Purpose. To be able to understand the basic concept of bonding in metal atoms, nonmetal atoms, and ions. Learn how to draw accurate Lewis structure and indicate its formal charge. Know how to name the molecules.