THEORIES ON THE ORIGIN OF THE MOON - PowerPoint PPT Presentation 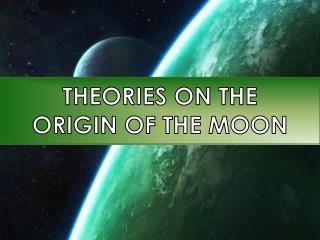 THEORIES ON THE ORIGIN OF THE MOON

THEORIES ON THE ORIGIN OF THE MOON. 3 THEORIES. Fission Theory Binary Accretion Theory Capture Theory. Fission Theory. The moon was once part of the earth. Due to the rapid rotation of the primitive earth, the moon broke away from it.

THEORIES ON THE ORIGIN OF THE MOON

How have Theories of the formation and structure of the universe changed? - S6e1a. relate the nature of science to the

Unit: 3 Earth Moon part 2 - . the atmosphere. earth had a primeval atmosphere from remaining gasses captured during

What is the difference between geocentric and heliocentric theories? - . “geo” means earth . “helio” means sun.

Earth and Moon Statistics - . by the lunar and planetary institute for use in teacher workshops.

Age and Origin of the Earth - . age of the earth. mysterious varied and contrasting results impossible to arrive at an

Origin of the Universe - . the three main theories put forward to explain the origin and evolution of the universe are:.

Theories on the Origin of Religions - . by mr. hill. theory one: animism. herbert spencer (1850s) - manism the gods of

Moon shots - The moon is captured by photographers from many different spots on earth, from different