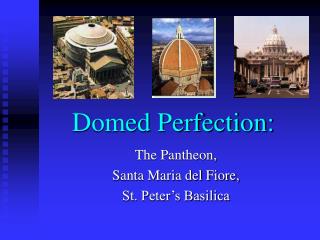 Domed Perfection:. The Pantheon, Santa Maria del Fiore, St. Peter’s Basilica. Roman grandeur. Pantheon is a Greek work meaning to honor all Gods. History. Agrippa had the original Pantheon erected in 27 B.C. after he crushed Anthony and Cleopatra at Actium. 13 Virtues of MEANINGFUL Marketing - . inspired by ben franklin’s 13 virtues. “i conceived a bold and arduous project

CASPAR All Hands #1 - . july 2006 prague. aims of the meeting. to think to make sure we produce something good if we aim

Perfection - . perfection – generally. process by which a creditor protects (strengthens) security interest from other

Hellenistic Art - . the search for the aim or truth. what is beautiful? that which “aims at its purpose” aristotle

“The Pursuit of Perfection” In Antebellum America 1820 to 1860 - . the second great awakening. “spiritual reform

Behold, I Am Jesus Christ, The Savior of the World - . finally, the testimony that is given of jesus christ, his