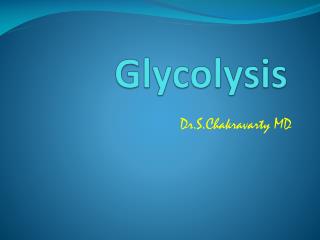 Glycolysis. Dr.S.Chakravarty MD. Learning objectives:. Analyze the importance of Glycolytic pathway that it can produce ATPs in both aerobic and anaerobic environment Differentiate between substrate level and oxidative phosphorylation Glycolysis - . anaerobic degradation of glucose to yield lactate or ethanol and co 2. learning objectives. sequence of

Glycolysis : - . each slide in this presentation represents one step in the reordering exercise. the order of the slides

Glycolysis - . walt glycolysis takes part in the cytosol of the cell glucose is oxidised to pyruvate by a series of

Glycolysis - Biochemistry of metabolism. glycolysis. glycolysis takes place in the cytosol of cells. glucose enters the

GLYCOLYSIS - . for centuries, bakeries and breweries have exploited the conversion of glucose to ethanol and co 2 by