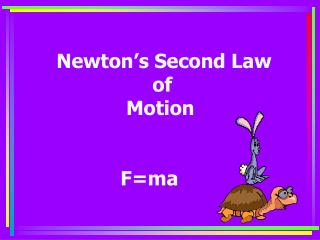 Newton’s Second Law of Motion F=ma. Why can a rabbit run faster than a turtle?. It’s really quite simple. He can apply more force to his mass than I can. Truck A Truck B. Which of these trucks can accelerate the easiest? Why?. GET OUTSIDE THE BOX