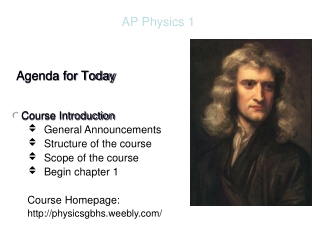 AP Physics 1 - . exam information. why should i take the ap physics exam? for college credit all ap exams are scored on a

AP Physics 1 and AP Physics 2 - . the college board redesigned the previous course ap physics b into two separate

AP PHYSICS - . an object is placed at a distance of 1.5f from a converging lens of focal length f, as shown above.

AP Physics - . ii.a – fluid mechanics. mass density. ex. what is the mass of a solid iron wrecking ball of radius 18

AP Physics - . torque and equilibrium practice. a uniform beam weighs 200 n and holds a 450 n object as shown in the

AP Physics - . chap 11 and 12 oscillations, waves and sound. march 5. learning target: i can understand the importance

AP Physics - . syllabus overview. snapshot. physics is the foundation science for all others physics studies matter,

Plan for Today (AP Physics 1) - . go over tests lecture/notes on work and energy. test results. average: 86.6 without the

AP Physics – 1 st Law Continued - . collect and read the handout on heat engine efficency from the front of the room