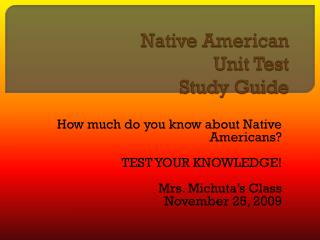 Native American Unit Test Study Guide. How much do you know about Native Americans? TEST YOUR KNOWLEDGE ! Mrs. Michuta’s Class November 25, 2009. The most important food source for the Native Americans of the Pacific Northwest was…. Tlingit – Food EOCT Study Guide - . eoct at a glance. all questions are multiple choice each section of the american literature eoct

Study Guide - . fhsaa online test prep quiz. match quiz 1. you are expected to arrive 30 minutes in the prior to the

A merican L iterature End of Course Test Study Guide Condensed Version - . source. this powerpoint is an adaption of the

Unit 1 Historical and Philosophical Foundations of American Government - . essential question. what are the

Native Americans Unit 1 - . 2012-2013 test review. how did native americans of the eastern woodlands area prepare their

“Cub Pilot on the Mississippi” - . study guide : the paper you create in class today is your study guide for