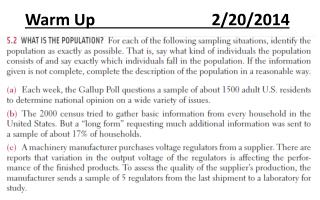 Warm Up 2/20/2014. Principles of Experimental Design (CRR). Control the effects of lurking variables on the response, most simply by comparing two or more treatments. Randomize – use impersonal chance to assign experimental units to treatments. Warm-Up 2/10/2014 - . find your writing goals sheet in your binder take out your song analysis draft get a green, blue,

Warm-Up 2/10/2014 - . take out your song analysis draft get a green, blue, pink, and yellow highlighter from the bins up

Warm-Up October 2, 2014 - . draw a picture of the three main types of fingerprints and label each of them. objective.

Warm-up - . click on the link below and read the article. jot down 5 interesting facts

Warm Up #2 - . what is a taboo? how do you think a taboo could hinder diffusion?. taboos. a restriction on behavior

Warm-up #2 - . write a paragraph describing the constitutional convention. use details for your textbook reading or

Warm-up #2 - . what was the adams- onis treaty and why was it important? compare the convention of 1818 and the rush-

Warm-up #2 - . which enlightenment philosopher did you like the most? which of their ideas appealed to you and why? .