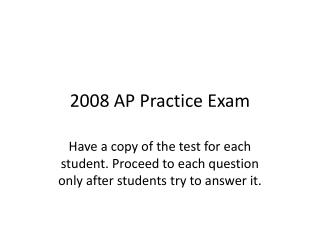 2008 AP Practice Exam. Have a copy of the test for each student. Proceed to each question only after students try to answer it. 1. C. Availability Heuristic. Estimating the likelihood of events based on their availability in our memory. AP Practice - . objective: to evaluate multiple choice test for ( pood ) and recognize categories of questions and

AP Exam - . part one principles for understanding our environment. succession. orderly change of species in an ecosystem

AP exam - . what you need to know ( taken from the college board site). writing. when you have penned what you think is a

The AP Exam - S. ome. scary. not to be confused with mrs. beckwith! . tuff. the ap exam. what you need/want to know.

AP PRACTICE TEST - . some explanations. new int’l division of labor. transfer of some types of jobs, especially those