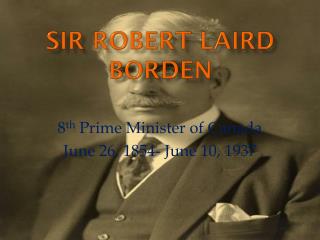 Sir Robert Laird Borden. 8 th Prime Minister of Canada June 26, 1854- June 10, 1937. Early Life. Born into a poor family on a farm in Grand Pre, Nova Scotia First job as a teacher when he was 14 worked as a clerk at a Halifax law office Called to the Bar Sir Robert Borden High School - . laboratory safety. snc1d. safety rules . 1. be prepared to work when you arrive at the

Sir Robert peel - . by will . facts. he was born in bury 1788 in lancashire on 5 th of february he was priminister twice

Lizzie Borden - . meet lizzie!. oh – and did i mention she was charged with patricide lizzie was accused of being a

Lizzie Borden - . lizzie borden took an ax and gave her mother forty whacks. when she saw what she had done, she gave her

Sir! Sir! Sir! - . what type of behaviour is valued in the classroom. focus of research:. increase the pupils and my

Lizzie Borden: - . murderer or misunderstood?. august 4, 1892. the house on second street in fall river with the barn in

William Whiting Borden - . heir to the borden dairy estate graduated high school in 1904 as a millionaire what would you

Lizzie Borden Case - . did she whack her stepmother and father with an axe in the head multiple times? well im here to

Canadian Forces Base Borden - . simcoe county council – 27 january 2009. objective. to provide you with a brief

The Lizzie Borden Case - . by brittni baldeo. the