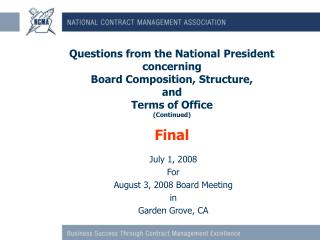 Questions from the National President concerning Board Composition, Structure, and Terms of Office (Continued) Final. July 1, 2008 For August 3, 2008 Board Meeting in Garden Grove, CA. Bringing Us Forward. Tasking From February Board Meeting discussed at April Meeting NCMA Board Meeting August 3, 2008 - Survey results &amp; analysis from n cma board of directors assessment for the

California Integrated Waste Management Board August Board Meeting August 19, 2008 - Discussion and status of the solid

Commercial Flooring, Garden Grove CA - We have a rating with bbb, ever since we have started this company, over one

Presentation for September 2008 Board Meeting - . a tale of two cities a statistical analysis of baltimore’s mature