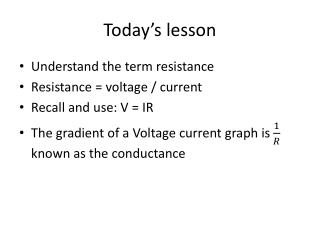 Today’s lesson. Understand the term resistance Resistance = voltage / current Recall and use: V = IR The gradient of a Voltage current graph is known as the conductance. Electric current flow. Connotation vs. Denotation - . how do we assign words meaning?. swbat. define connotation and denotation read a sentence

This presentation is licensed for use on a single computer and is non-transferable. - Adult sabbath school lesson in

The following 15 PowerPoint slides are from the 2 lane driving lesson…in total there are 65 slides in this lesson - . a

Lesson 10 - . check-in: presentation. you should be at least halfway done with your powerpoint presentation raise your

This presentation is licensed for use on a single computer and is non-transferable. - Adult sabbath school lesson in

Lesson PowerPoint Presentation for… How did the Stamp Act Increase Tensions in the colonies? - Teaching democracy. kate

MSITA PowerPoint-Lesson 4 - . working with a presentation outline. creating a blank presentation:. one way to create a

PowerPoint An extra lesson to provide you with even more valuable computer skills - . computer literacy 1 transition plus

Microsoft PowerPoint 2010 - . lesson 1. on completion of this lesson, students will be able to do the following:. start

Pediatric PowerPoint - . presented by sandra lasater slasater@madison.k12.al.us. so, you know a little about creating a