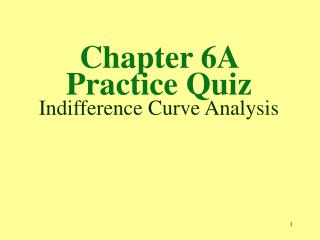 Indifference Curve Analysis - . 1. a consumer is assumed to buy any two goods in combinations. 2. a consumer can rank the

Indifference Analysis - . shape of ‘clive’s’ an indifference curve. a. notice that this curve is downward sloping

Chapter 6a - . communication, integration, and homeostasis. about this chapter. cell-to-cell communication signal

Chapter 6A - . a tour of the cell. cytology: science/study of cells. light microscopy resolving power~ measure of

Phillips Curve Practice - . and other stuff. manipulating the pc. movement along the srpc caused by change in ad

Chapter 9 Practice Quiz Monopoly - . 1. a monopolist always faces a demand curve that is a. perfectly inelastic. b.

Practice Quiz - Practice quiz. yes or no?. have you ever regretted something? does our country hold regret? is it

Practice Quiz - . 1. a car possesses 20 000 units of momentum. what would be the car's new momentum if the velocity was