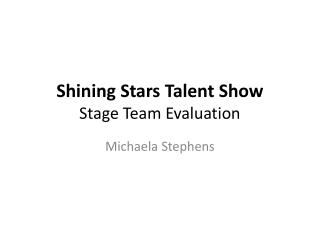 Shining Stars Talent Show Stage Team Evaluation. Michaela Stephens. Start of the Show. One hand-held microphone was required off – stage for a compare to announce the beginning of the show. This was prepared in time, and successfully by a member of the stage team. Act 1 - Cheerleaders. Shining stars - . kitty tinsley prior to the show i slotted colour filters in the lights and matched up the colours to

Welcome To Shining Stars 2010 - . change. switch how to change things when change is hard chip heath and dan heath dean

CSES Talent Show - . if mrs. porter does not receive the signed permission slip at the bottom of this form by wednesday,

The Talent Show - . vocabulary. gym. large indoor room used for sports or exercise. perform. put on show for other

Third Grade Talent Show - . it’s that time of year again! our third grade is having their annual talent show. the

Chamakte Sitaaray (Shining Stars) Events 2018 - You watch the bollywood stars on television and in the movies. but how

All Stars! team - . bob turner’s team. “the difference between ordinary and extra ordinary is that little