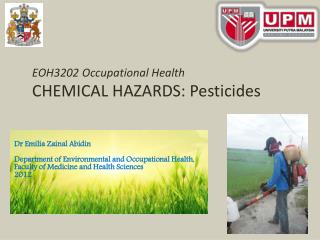 Excavation and Trenching - . the hazards of excavation &amp; trenching and how to control them. developed by division

Chemical Risks in the Process Industry - . topics. definition of hazards types of hazards and potential consequences

Study on Health Effects of Indoor Air Pollution in China - . presented by pan xiao-chuan et al. dept. of occupational and

Pesticides - . kay box edci 270. why is this important to

Play It Safe with Pesticides - . how to properly handle hazardous materials. pesticides are chemicals used to destroy,

The Safe Handling of Pesticides - . mixing and loading. what are pesticides. insecticides herbicides fungicides