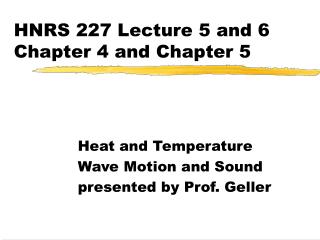 HNRS 227 Lecture 5 and 6 Chapter 4 and Chapter 5. Heat and Temperature Wave Motion and Sound presented by Prof. Geller. Recall from Chapters 1, 2, 3. Units of length, mass and time, and metric Prefixes Density and its units The Scientific Method Speed, velocity, acceleration Force Chapter 4 - . nomenclature &amp; conformations of alkanes &amp; cycloalkanes. about the authors. these powerpoint

Lecture 17 Chapter 9 Marker genes - . neal stewart. discussion questions. 1. why use marker genes? 2. what are some

Chapter 8 More on Transportation - . lecture #19 hnrt 228 energy and the environment adapted from university of wisconsin

AJ 104 Chapter 3 - . types of evidence. 1. relevant evidence. any evidence that tends to prove or disprove any disputed

CEDA Chapter - . the petition to form the ceda chapter was submitted on dec, 31, 2011 and the chapter was approved on