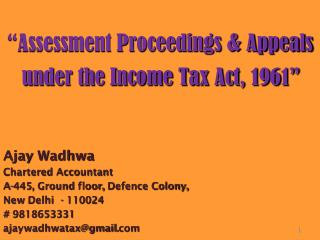 Law of Partnership ~ Partnership Act 1961~ - . by: dr. zahira mohd ishan. content. background what is a partnership?

THE APPRENTICES ACT, 1961 - . the act extends to the whole of india. applies to those apprentices who are undergoing

Survey and Search &amp; Seizure under Income Tax Act, 1961 (including assessment of survey cases) - . presented by:

The Art of Appeals - . presented by lori dafoe, cpc. agenda. review what to look for in an appeal, while reviewing an