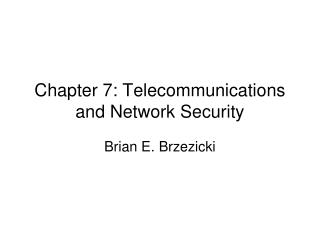 Chapter 3 Networks and Telecommunications - I. why networking 1. purpose of networking: connect computers for the purpose

Chapter 3: Network and Communication - . what is a network? what types of network are there? what networking standards

Chapter 12 Network Security - . viruses &amp; worms. there are many different types of viruses, such as parasitic,