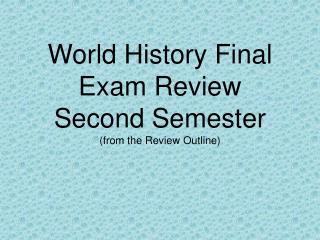 World History Final Exam Review Second Semester (from the Review Outline). Absolute Monarchs. Define Absolutism. What is it?. 1.This was when a monarch or ruler had all the power. They believed that they had the “ god-given ” right to rule. (Examples: Phillip of Spain, Review for World History Spring Semester Final Exam - . directions. use a separate sheet of paper to answer the review

Final Exam Review World History B - . world war ii axis powers . the major cause of wwii was expansionism in europe and

Final Exam Review - . there was a general review of the chapters on optics and the equations from the first half of the

World History Semester Review Review Game - . the main purpose of the pyramids of egypt was? . tombs for the pharoahs .

World History Semester Review Review Game - . the main purpose of the pyramids of egypt was?. tombs for the pharoahs. a1.

Second Semester Review - . be careful, if you get the wrong answer, you will have to start back over from the very