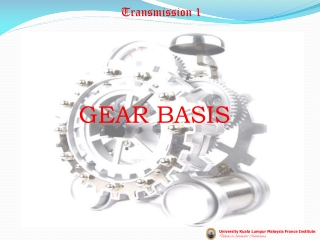 GEAR BASIS. INTRODUCTION. Gear is a rotating machine part having cut teeth or cogs, which mesh with another toothed part in order to transmit torque. Two or more gears working in tandem called transmission and can produce mechanical advantage through gear ratio Gear Up - . chelsea combe justin dire stephanie domenico. who we are. gear up gear up is laramie’s number one hot spot

Knight’s Gear and what to look for when choosing Gear For None members - . gear is broken down into many categories and

Gear Pumps and Gear Motors - . basic information. gear pumps are a type of positive displacement pumps, which use gears

LSU GEAR UP at the forefront - . using hip-hop to increase gear up students’ knowledge of college access, acceptance,

Knight’s Gear and what to look for when choosing Gear For None members - . gear is broken down into many categories and

G E A R S - . what is a gear? toothed wheel transmits rotary motion and power what do they do? change the direction of

Basis Sets - . ryan p. a. bettens department of chemistry national university of singapore. we’ll look at…. what are

Gears - . transmits rotary motion torques. why use teeth? why not friction rollers? teeth need to be specially shaped to