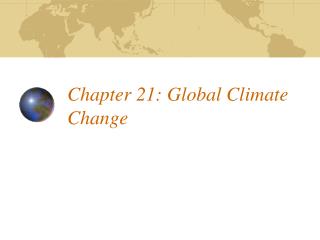 Chapter 21: Global Climate Change. Foreword. The issue of global climate change may be one of the most important issues facing humanity in its history This issue has the potential to affect the economies, safety and health of the entire world’s population GLOBAL WARMING Our Responsibility Toward Climate Change - Global warming “not only is it real, it's here, and its

CLIMATE AND LAND USE CHANGE IN PACIFIC MESOAMERICA - . challenges for conservation of biodiversity and sustainable

Air &amp; Air Pollution - . see what you know. what is in the air? what is the difference between global warming and

Chapter 20 - . climate change and ozone depletion. chapter overview questions. how have the earth’s temperature and

The Science of Climate Change - . explaining why we need to act now. prepared with material from npl (uk), ipcc, bom