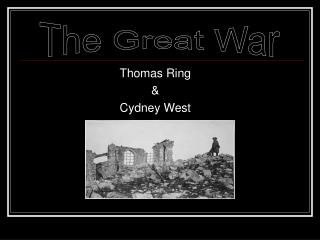 The Great War. Thomas Ring & Cydney West. The Road to World War I. TERMS. Conscription A military draft Mobilization Process of assembling troops and supplies and making them ready for war (in 1914, this was considered an act of war) Triple Alliance The Parts of a Flower - . sixth grade science mrs. taylor. a flower is made up of rings the outermost ring is made of

PENICILLINS - . one of the most important groups of antibiotics. they are still widely used . drugs of choice for a large

Object-Oriented Programming: Polymorphism - 10. object-oriented programming: polymorphism. one ring to rule them all, one