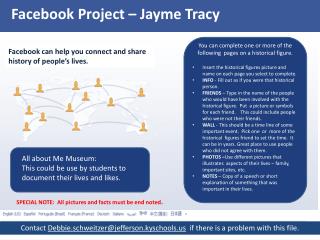 Facebook Project – Jayme Tracy. You can complete one or more of the following pages on a historical figure. Insert the historical figures picture and name on each page you select to complete. INFO - Fill out as if you were that historical person. Jayme - . get to know more…. what i like to do…. love to hang out with friends love to go swimming spending time with

HOW TO ATTRACT CUSTOMERS WITH FACEBOOK - Believe it or not, facebook isn't just for cat photos, news articles, selfies,