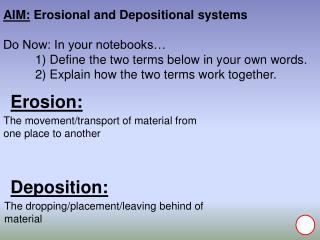 AIM: Erosional and Depositional systems Do Now: In your notebooks… 1) Define the two terms below in your own words. 2) Explain how the two terms work together. Erosion: Deposition:. The movement/transport of material from one place to another. Soil Erosion - . grading standards in the udc. the purpose of erosion control as stated in the udc is to prevent or

Soil Erosion Issues &amp; Management - . by: nathan lenig. how to operate this activity. navigation. use this button

Coastal Erosion Processes: - . waves of oscillation and waves of

Higher Coasts Lithosphere - . higher coastal landforms &amp; processes. in this part of the course we will be looking

Weathering &amp; Erosion - . choose ok. what is weathering?. weathering is a set of physical, chemical and biological