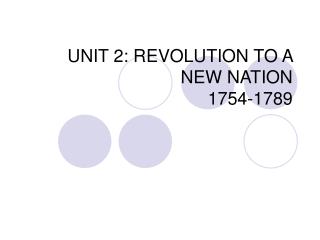 Shaping A New Nation Chapter 5 1781-1789 - . experimenting with confederation. americans adopted the articles of

1789: The Road to Revolution - . “…the aristocracy opened the way to the bourgeois revolution, then to the popular

The American Revolutionary Era, 1754-1789 - . the french and indian war the imperial crisis and resistance to britain the

A New Nation - . john adams. first vice president of the united states. precedent. an act or instance that may be used as

Unit 3: A New Nation - . goals of this unit:. to understand that the american revolution was not a radical transformation

Unit 2 A Nation is BOrn - . the british government was not yet ready to give the colonies responsible government lord

Unit 2- A New Nation-Early America - . chapters 4 and 5. bell work. what is the importance of the constitution? what kind

The Road to Revolution 1754-1775 - . causes of the american revolution. terms to know. gentry : the highest social class

From Colonies to a Nation, 1783-1789 - . i. the radicalism of the american revolution. a. revolutionary politics.

A New Nation 1789-1800 - . brought about a new constitution moving forward: the task ahead of washington and congress was

The American Revolutionary Era, 1754-1789 - . state constitutions and the articles of confederation the federal