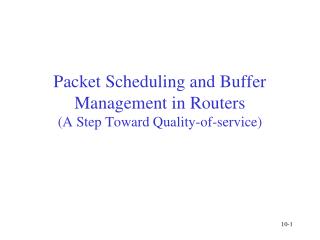 Packet Scheduling and Buffer Management in Routers (A Step Toward Quality-of-service). Best-effort V.S. Guaranteed-service. The current IP network does not provide any guarantee for the service that a packet will receive. Router Design and Packet Scheduling - . . . . . . . ip router. a router consists a set of input interfaces at which

Buffer Management - . storage technology: topic 2. effective use of main memory. memory is used as a cache for data on

Buffer Management - . the buffer manager reads disk pages into a main memory page as needed. the general idea is to

FMEA RISK MANAGEMENT And How It Helps In Managing Risk? - Fmea (failure mode and effects analysis) is a step-by-step