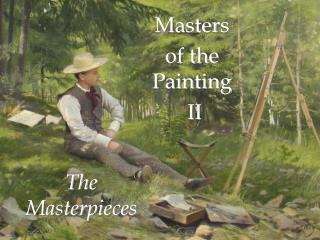 The Masterpieces. Masters of the Painting II. The Courtyard of a House in Delft. The Virgin and Child with Saint Anne. A Grotesque Old Woman. The Gare St-Lazare. Summer’s Day. Fruits and Flowers in a Terracotta Vase. A Girl with a Kitten. Fruits Dish, Bottle

Garden at Giverny - The masterpieces of claude monet. garden at giverny. claude monet was born on november 14, 1840 in

CREATIVITY - . nearly all the battles which are regarded as masterpieces of the military art, have been battles of mano e

Handicraft Christmas Decorations - . children with their felt ornaments. the masterpieces. process of making the door

John Milton, English History, and Paradise Lost - . james i dates: . 1603 – death of elizabeth and ascension of james i

The Order of Proportion - . ‘ for the harmony of the world is made manifest in form and number, and the heart and soul Noida the place to be in the future - Godrej golf links is touted to be one of the best high end residential, 9 hole golf