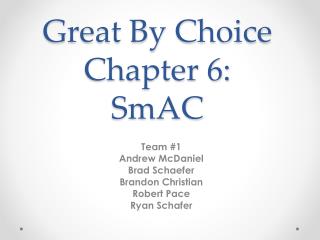 Great By Choice Chapter 6: SmAC. Team #1 Andrew McDaniel Brad Schaefer Brandon Christian Robert Pace Ryan Schafer. SMaC & Southwest. Southwest Airline Decided to use same recipe over a nd over for what they already do well Putnam Specified every detail for the airlines success The Great Crash and The Great Depression (Chapter 25 is a must Read!!!) - . in 1929, yale university economist irving

WHY TAKE A FRESH LOOK AT CHOICE? - . there is a great deal of new evidence law and policy are newly open to choice

Chapter 10 - . sumeria had sargon the great. china had yu the great. persia had cyrius , darius, and xerxes…all “the

Welcome to the 2013 SMAC Conference - . smac sincerely appreciates all of our generous sponsors!!. 2013 smac vendor

Smac by Acsg Corp. - Acsg corp. now works on smac. it a admirable technology through which they resolves various