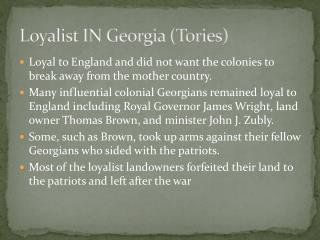 Loyalist IN Georgia (Tories). Loyal to England and did not want the colonies to break away from the mother country. Many influential colonial Georgians remained loyal to England including Royal Governor James Wright, land owner Thomas Brown, and minister John J. Zubly . The New Hampshire Loyalist Experience - . who were the loyalists?. thomas hutchinson, royal governor of massachusetts.

Georgia adopts a state constitution - E.q: what led to the evolution of georgia’s government from a royal colony to a

The Age of Reason - . contents. 1.historical background . 1. the tories and the whigs greatly influenced the country. .

Patriot or Loyalist? - . by: mike smith. my family. mary is my wife. i have three children.

Devolution finance under the Tories - Presentation for iwa/wgc conference on ‘life under the tories’ cardiff, 3

The American Revolution - . the revolution as civil war. tories vs whigs; loyalists “tories” a sizeable percentage at

Patriot or Loyalist ? - . during the american revolution, most american colonists had to decide to support the war for

Questions for Loyalist Cartoon - . who/what do you see in this cartoon (objects, people)? why are the children laughing

Patriot, Loyalist, or Neutral? - . you