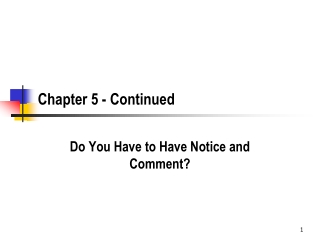 Chapter 5 - Continued. Do You Have to Have Notice and Comment?. Why Avoid Notice and Comment?. Remember rulemaking ossification? What is the benefit to the regulated parties of interpretive rules and guidance? What if the agency is prevented from providing guidance documents? Chapter 5 continued - . how and why firms grow geographic organization of corporations forces of production &amp;

Chapter 5 continued - . monday 15 april 2013. explain how the constitution can be changed by holding a referendum

Chapter 5 continued - . monday 25 march. review of last lesson. how are law-making powers divided between the

Chapter 10 continued - . getting from here to there. multi-step conversions. if i asked you how many cups of water are in

Chapter 21 Continued - . the zhou dynasty. overthrowing the shang. around 1045 b.c.e., during the shang dynasty, the

Chapter 21 continued… - . why is she having a bad hair day???. simply rubbing one object against another can transfer

Chapter-16 (continued) - . 16.5  the nature of sound. longitudinal sound waves sound in air is a longitudinal wave that