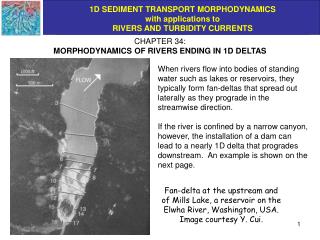 CHAPTER 34: MORPHODYNAMICS OF RIVERS ENDING IN 1D DELTAS. When rivers flow into bodies of standing water such as lakes or reservoirs, they typically form fan-deltas that spread out laterally as they prograde in the streamwise direction. Running water: Rivers and Streams - . weathering, transport and deposition. the water budget and groundwater. the

Models of Animated Rivers for the Interactive Exploration of Landscapes - Grenoble institute of technology (inpg). a

Models of Animated Rivers for the Interactive Exploration of Landscapes - Grenoble institute of technology (inpg). a

Aquifers in Alluvial Sediment - . unconsolidated sands and gravels deposited by rivers. must be large enough to produce